Check out the AIFS Study Abroad student blog! This blog contains student accounts of numerous different countries and trips! It is a great source if you are looking to study abroad but are unsure of where to go.

This blog is created by CEA study abroad programs as a place for student who travel through CEA programs to document their experiences. The blog contains posts from all over the world! Take a look at the page and find out information about your future destination.

There are so many places to see all over the world and this blog is helpful when trying to get information on numerous countries at once. This blog was created by International Studies Abroad (ISA), a national organization designed to create programs to help students study abroad. This blog contains information about a wide array of different countries that ISA sends students to.

Interested in studying abroad in Panama? Check out Bintu Musa’s travel blog to see what it could really be like!

Our second day in Panama started early the next day where we took a bus to Portobello and Isla Grande. I learned that Portobelo, now a UNESCO World Heritage Site, was an important trade port on the route of the Spanish treasure fleets. The Spanish built defensive fortifications to keep out rebels but was attacked by Henry Morgan and Edward Vernon in 1668 and 1739 respectively.

After Portobello we arrived at Isla Grande where we took motor boats to the Island. Upon arrival we ate lunch at a bar which was decorated with Bob Marley paraphernalia. There were huge plates of salad, fish, and rice that were passed around from table to table. It seemed very family oriented and I later saw that another family also took food from a large dish and placed it on their individual dishes. After lunch some of the students took a hike to the top of the Island where we got a gorgeous view of another island and the Pacific Ocean. While hiking we saw beautiful butterflies and ants carrying little leaves. The professor who was leading the hike explained that the ants were taking the leaves to bury them in the ground to create honey! 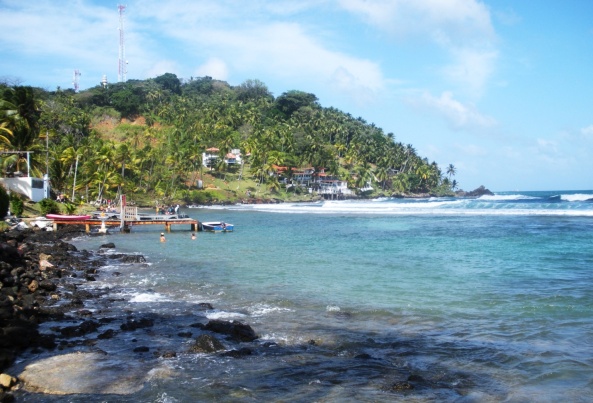 In General while walking around Isla Grande I noticed that the atmosphere was very laid back. Everyone was relaxing, eating, drinking, listening to music and seemed to be having a good time. Unfortunately we had to leave at 5:00pm to head back to the City. It took a very long time to get back because of all the traffic from the holiday weekend but it was worth it

First, I did not know that the French initially started the construction of the Panama Canal that was completed by the United States in 1914. I also learned that there are three locks along the 51 mile canal: Gatun, Pedro Miguel and the Miraflores. Fabio, our guide, later told us that the amount of material that was excavated from the canal was large enough to circle the earth four times! We were lucky enough that we were able to watch two ships pass through the Miraflores locks as they continued their way to the Pacific Ocean. We learned it cost the cruise ship we saw $250,000 to pass through the locks. At first, this seemed like a lot of money to me, however passing through the canal, which takes 8-10 hours saved the cruise ship $2 million and two weeks (Unbelievable!)

Our fourth day in Panama we visited Casco Antiguo the old city. First and foremost, the view of Panama City from Casco Antiguo took my breath away. We could see the entire skyline which seemed to stretch on forever. I found it fascinating when Fabio explained that Panama is currently in the process of building smaller islands off the coast similar to those in Dubai. Fabio further explained that Casco Antiguo is going through a huge makeover, reconstructing and remodeling the old buildings in the city into lavish hotels and apartments. It was also interesting to learn that because the French occupied Casco Antiguo in the past, the architecture of the building are similar to those in France which I noticed with the various balconies. I learned that the French had a huge influence in Panama from the Canal to Casco Antiguo.

Today we hiked up Ancon Hill which is a 654-foot and overlooks Panama City. We were told that when the pirate Henry Morgan invaded Panama City in 1671, his scouts first climbed the hill to gain knowledge about the local defenses. We also learned that the fist ship to transit the Panama Canal was named the SS Ancon after the hill and surrounding township.

The hike was not strenuous; in fact it wasn’t really a hike at all! There was a paved road leading to the top of the hill and it took our group only about fifteen minutes to climb to the top. When we arrived the views were breathtaking. Not only could you see all of Panama City, but you could also see the Old City, the Panama Canal, and the Bridge of the Americas. 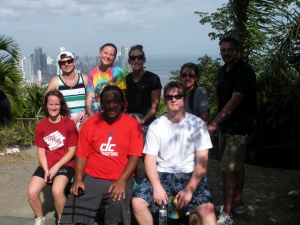 In addition to the beautiful views there was a massive national Panama flag (the size of a basketball court!) flying at the top. There were also a few old structures painted bright colors almost like cabanas on the perimeter of the hill.

Our trip back down was at a leisurely pace and we even saw a sloth and a dear! The views at the top are indescribable so hopefully the pictures can speak for themselves!